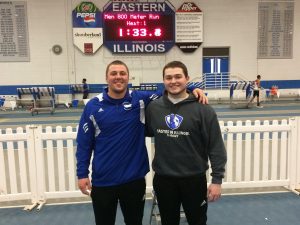 Clayton Turner, a junior at EIU and 2015 Tuscola Community High School grad, has put in the work and is now a top thrower for the Eastern Illinois University men’s track team.

The Eastern Illinois Men’s and women’s indoor track & field teams then displayed a strong showing at the Illinois Classic as the Panthers earned nine top three finishes on the day, with four first place finishes. The EIU men finished the Illinois Classic third overall, while the women placed fourth.

Ryan Pearce earned a second place finish in the shot put with his throws distance of 53-00.00

The full story can be found in the Wednesday, Jan. 31 edition of The Tuscola Journal.