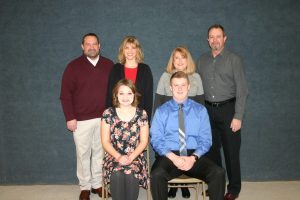 Submitted photo
Pictured are the DAR and SAR honorees for Tuscola DAR Sidney Hoel, daughter of Drew and Christy Hoel, and SAR Jacob Craddock, son of Dan and Jeannie Craddock.

The Villa Grove United Methodist Church hosted the 63rd annual Stephen A. Douglas Chapter, DAR/SAR (National Society of the Daughters of the American Revolution/Sons of the American Revolution) Good Citizens’ Luncheon on Saturday, Feb. 17, 2018. There were approximately 45 in attendance including the awardees, parents, DAR members and guests. Front Street Market from Hume provided the meal.

Each of the DAR Good Citizens is given an opportunity to write an essay that makes the student eligible for a large monetary sum at the national DAR level. This year Sydney Hoel from Tuscola was the chapter’s essay winner. She was awarded a monetary gift from the Stephen A. Douglas Chapter and received an American flag flown over the U.S. Capitol. Her essay has been forwarded to our district level for further judging.

Program speaker was Walt Wright, retired Villa Grove Sixth Grade Teacher. He shared his passion to teach kids rather than textbooks. He encouraged students to love where they live, celebrate their country, take blame and own it, believe in what is important to you, give credit where due, and to keep your word.