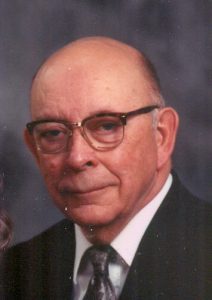 Born on July 20, 1926 to Paul Thomas and Inez Utterback Quick in a house in southeast Atwood in Douglas County. Paul Eugene Quick worked on his Grandfather Utterback’s farm during summer vacation between the ages of ten and fourteen. In 1944, he graduated from Atwood High School, where he played basketball and football, serving as captain of the basketball team during the 1943-1944 school year. Growing up, he assisted his father in his duties as church sexton. Following graduation, Paul served in the U.S. Navy from 1944-1946. After the war, he briefly attended Bradley University. Later, he owned and operated Quick’s Radio and T.V. from 1951-1971. From 1966-1971, he worked in Quality Control at USI. Paul was a utilities operator at Kraft from 1971-1988, retiring in 1988.

In 1949, Paul married Carolyn Seaman, who preceded him in death in 2010. They were married for 61 years. He is survived by two daughters, Marilyn (Alan) Brown of Meridian, Miss., and Julia (Bob) Wolf of Mahomet; and two sons, Tom (Donna) Quick of Macomb, and David (Lauri) Quick of Tolono; and grandchildren, Andrea Brown (Kenny) Reynolds of Huntsville, Ala., Vanessa Brown (Cole) Walker of Meridian, Miss., Katie Quick (Lance) Myers of Colchester, Mandy Quick of St. Louis, Mo., Jason (Mackenzie) Quick of Macomb, Jake (Kendra) Wolf of Tolono, Josh (Janet) Wolf of Champaign, Justin Quick of Tuscola, and Megan Quick (Riley) Pierce of Sidell. Paul was also a proud great-grandfather of 11 great-grandchildren. He is also survived by his sister, Helen Jones of Mt. Zion, his brother, Dale (Martha) Quick of Dixon, and by several cousins, nieces, and nephews.

Paul was an active member of the Atwood community. He belonged to the James Reeder American Legion Post #770 from 1946 to 2018, serving twice as commander. He had been a member of Lake Fork United Church of Christ since 1941, when he was baptized. He served as chairman of the Lake Fork Board of Trustees and served as president and treasurer of Men’s Fellowship. Paul was a member of the Freemasons from 1953 to 2018. He was also a member of the Lion’s Club. For many years, he served as Unity Township Supervisor. Paul officiated IHSA basketball from 1950-1970 and football from 1955-1975.

Paul had a life-long interest in sports, the outdoors, and antique automobiles. Paul was an avid Cubs, Bears, and Illini fan. He hunted deer every year from 1959-2016, and he made five trips to Canada to hunt moose. He was also a charter member of the Lake Fork Sportsman Club. Paul and his wife Carolyn made a two-month trip to Alaska in 1989. He devoted much of his free time to restoring his 1926 Model-T Ford and his 1929 Model-A Ford. As a member of the Champaign Prairie A’s Antique Model-A-Club, Paul participated in two road trips to Indiana and western Illinois. He also drove his antique cars in parades, often with family members riding along.

Memorials may be made to the Lake Fork United Church of Christ or the James Reeder American Legion Post #770.