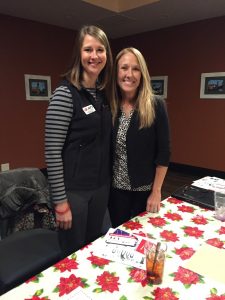 The December meeting of the Stephen A. Douglas Chapter, NSDAR had a diverse agenda. The Clinical Director of ATI, Jessica Ray, accompanied by Julie Shields, Sales and Marketing Director of ATI, spoke about the benefits of physical therapy and how to know when a person needs that kind of help.

The chapter National Defense Chairman Jane Faust recounted the story of the USS Dorchester, a transport ship with 902 men on board going to Greenland in 1943. German U-boats sank 100 ships a month in an area of the North Atlantic where the Dorchester was headed. Within 125 miles of its destination a torpedo hit the Dorchester below the water line, killing many men and wounding more. Panic set in but the four chaplains onboard, who had just completed training of their own, calmed the men, handed out life jackets until there no more except those on their backs. The chaplains – a Methodist, a Rabbi, a Roman Catholic priest and a Dutch Reformed minister – gave theirs away. Only 230 men survived. As the survivors looked back at the ship, they could see the four chaplains with arms linked and braced against the sinking ship reciting prayers and singing hymns. Posthumously the four received not only the Distinguished Service Cross and Purple Heart, but Congress authorized a special medal for Heroism in 1951 called The Four Chaplains’ Medal. There are more than 300 memorials, plaques and statues dedicated to these four courageous men.

The American Spirit (the NSDAR magazine published bimonthly) featured the Illinois Executive Mansion on its cover plus historical pictures and an article about the ongoing renovation and preservation of the mansion. Illinois is celebrating its 200th birthday through 2018 and, in honor of that, the Executive Mansion will host an exhibition of Illinois fine and decorative arts, titled “Art of Illinois”, from August 2018 through December 2018. Mark your calendars. A virtual version of the exhibit will be made available online.

The next DAR chapter meeting will be the DAR/SAR Good Citizens’ Luncheon on Feb. 17 at the Villa Grove United Methodist Church.