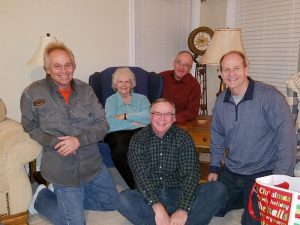 By Craig Hastings
On the 26th of December my brother Greg and his wife Jan opened their home to the rest of the local Hastings clan for a Christmas celebration. I only included the local reference because sister Tracy, her husband Scott, and their children Amy and Jeff were unable to attend. Seems my niece has a notion to get married in someplace overseas called Denmark this Christmas. Amy, I wish you all the best this world has to offer, but there isn’t any way this broken up uncle can maintain his composure in a plane for 9 or 10 hours. Besides, I’m a boring party guest I’m told.

Greg and Jan have a beautiful home inside and out, and it was built perfectly for family gatherings. So the rest of us converged on the property in sub zero wind chill weather. It’s different for us during the Holiday season. You see, the four of us boys have lived here our entire lives. We see each other whenever we choose so there isn’t the buildup of wondering how much any of us have changed, what we’re currently doing in our lives, or whose new in our worlds. It’s a really casual gathering with not much emphasis on what we wear or whether we arrive late or leave early, or, in my case, I stepped out for a city council meeting for a bit and returned after. Not a big deal.

Let me back up to the clothes thing. There were a couple of the girls in attendance that clearly thought about what to wear before stepping out but not the boys. It’s okay the girls care about looking festive I guess but had they grown up around the Hillcrest posse they would understand yesterday’s jeans and a wrinkled sweater would be just as good as any special closet selection. Personally I feel fortunate that my brothers and I have stayed living in the same town. I don’t want to be surprised to see anything about any of them that has changed. Because we’ve all stayed here I don’t notice changes in them. When we’re all together in the same house at Christmas I remember them just as I did when we were all little kids sneaking about the house in the dark wondering if dad heard us.

Sure, sure I know, “Come on Craig you four geezers could pose as those four purple California raisin characters!” I get it, but you say that because you don’t see us all the time. I have to remind myself of our ages, because I just don’t see it or “feel” it like I would most people I’ve known most of my life. My brothers are still the kids I grew up with for 50 plus years. We tell the same “remember when” stories over and over, and they never get boring. And if sister Tracy were here with us this night she would tell you she was one of the guys back in the day and could tell all of the same stories. I’m uncomfortable even around people I know and especially so in crowds. Not here tonight.

But the best part of the entire night was when my 84-years-young mother walked into the room. We lost our dad in 1996, and he was always the Christmas spirit that ramped up the Christmas Eve gift exchange. After dad passed my mom’s Christmas candle nearly went out. For years after she lost interest in the whole idea of gathering together in the same house. Even today she struggles with the idea of getting dressed and out into the cold winter night to travel to another home to take part. I admit I feel the same way most of the time. But, like my mother, once I get there I’m glad I showed. I’m sure without the female influence these gatherings would not be as well attended as they are. My boys showed up without being required to and enjoyed themselves and are never ready to leave. Nephews Turner, Aaron, niece Mindy, and Mindy’s’ two children were also in attendance without evidence of boredom either.

How many of these evenings are left? I wonder but not nearly enough do I wonder. I’m guilty of taking for granted that tomorrow will always be the same as the day before so no need to take in as much as I can today, because, why, there’s always tomorrow. The rest of you; don’t make this same mistake I make all too much. I hate it that Tracy lives in Michigan, and I can’t just stop and bug her whenever I want. I wonder, was there a time when people didn’t count the days? Was one day and one night just like the ones before? If they didn’t count there would be no way to gauge the average days and nights their parents, their siblings, nor their own children should live.

Think about that. If we didn’t have this day, week, month, and years of life calendar some nerd came up with there would be no basis to believe our time was near the end. Each day would be like the one before, and the only thing different would be the weather and the speed at which our bodies moved. There would be none of this talk of OMG such and such are getting so old that just any day they might pass! Speaking of the speed in which we move…if the picture taken this night of us boys is with this story, the two on their knees were in slow mo trying to stand back up and the one crossed legged in the middle might still be there; he was stuck fighting a cramp as I walked away trying to regain a full standing position myself! Happy New Year to all in 2018!

Holding It All Together-So Now What?

May 23 is World Turtle Day